A general note and warning about glues and adhesives.
Because of the nature of some glues (poly-cements, epoxy, superglues), you should always use caution and read the manufacturers instructions prior to using them. Always use adequate ventilation as some can create noxious fumes as they cure. Never use most glues with, near, under or around flames – superglues, poly-cement, and some epoxies are very, very, very flammable!
There, my butt is covered in case something bad happens.

This is your run of the mill plastic modeling glue. This glue works by literally welding the plastic together by chemical reaction. This is best used on the plastic (polystyrene) models. Be care how much you use though, too much can turn your plastic into ooze (this can a good thing as we’ll explore in the advanced section). Sometimes called poly cement or polystyrene cement, it comes in two general flavors (don’t eat it!!!) Thin and thick.

Testors sells the thicker version in a blue or orange tube. This is probably the kind that most people will recognize from their childhood fling with model kits. This is what I use for a majority of my poly and plasticard glueing. It cures quicker and has a stronger bond than the thinner cement.It can be applied from the tip of the tube but I put some down onto a piece of paper and apply it with a toothpick. This insures the glue only gets where I want it to.

The thinner stuff comes in a bottle that usually has some kind of needle/dropped type of applicator built into the bottle. This is better for very small parts and finicky details where it might be hard to hid the glue lines or you simply don’t want any possible spillage onto other areas. There are other makes and models, but Testors is the most readily available in my area. 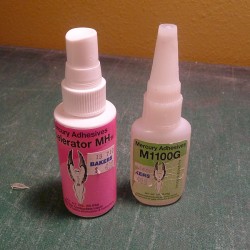 Ahhhhhh Super Glue! Originally gained the public eye as liquid stitches during the Vietnam War, superglues create a super strong bond and dries very fast, even faster in the presence of water – which is why your fingers stick together almost immediately. The plus side of superglues (or Cyanoacrylates) is it will bond almost anything to anything and it dries fairly quick (compared to some glues like plastic cement).

The downside is the pluses can also be a downside too. Sticking your fingers/hands/lips together us painful and it can happen quickly. The fumes created by the curing process can “fog” or craze clear plastics so don’t use them on windshields, headlights and the likes. While superglues are very, very strong, they’re only strong in one direction. Usually perpendicular to the two surfaces being glued. Parallel or diagonal shearing forces can easily knock these surfaces apart. This can be overcome in some instances by pinning which we will cover later.

There are many types of superglues, more than polystyrene cements. Thick, thin, ultra-thin, etc. I use the thicker type as it helps fill gaps (which is why some are branded as gap-filling superglues). You can use the kind found in department stores like Targe/Walmart and they’re not much different than the ones you can purchase in a hobby shop or specialty store. I prefer the specialty stuff simply because the bottles are designed with more delicate applications in mind. Longer, pointed applicators and caps with needles built in to automatically keep the nozzle clear are some of the benefits of these more expensive glues.

Another good reason to purchase superglues in a hobby environment is they usually sell accelerants right next to them. An accelerant is basically water and rubbing alcohol mixted in a small spray bottle. This mixture, sprayed over super glue, will almost instantly cure the glue. This can be especially handy when your glueing metal models together that need to be held together for a long time. A spritz of this stuff will set the glue really, really fast! I strongly urge you to get an accelerant no matter what brand you use. it simply rocks! Less time holding and waiting for things to dry. There is down side to most accelerants though, it will mushify plastics. This is mainly a problem for those building multi-part metal-plastic models. There’s a workaround for that though and I’ll tell you about that in the Advanced Tips and Tricks section.

PVA or Paper and Wood Glues 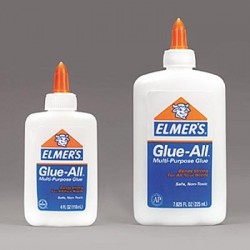 These glues are usually made for glueing very porous materials together – woods, paper, etc. The most common here in the US is Elmer’s Brand white glue. You’ve all seen it in grade school. While you could use the more yellow colored specialty “wood” glues, there’s really no reason to as the Elmer’s type of glue is really cheap and you don’t gain anything by using something “more specifically engineered to glue wood” better.

The most common use for this type of glue is for glueing down flocking on bases or terrain. Watered down and brushed on, this glue dries hard and fairly clear so you don’t see it through the grass when it dries. It’s also very handy for glueing clear plastics like windshields and canopies as it dries clear and doesn’t craze (the industry term for fog) up like superglues do. 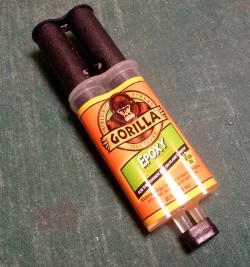 Epoxies will create the strongest bond for your models. This glue, most commonly sold in double-barreled syringes, can be messy and takes more time to cure than other glues. Be careful to read the instructions thoroughly as mixing times may vary between manufacturers.  I only use this type of glue when I’m gluing magnets or attaching large, heavy models (dreadnaughts) to their bases. Works very well for very large metal works too.

This is something of a recent discovery for me (thanks to pox) and has helped me with some really troubling issues. Plumbers Putty (two part epoxy putty) is sold in tubes and works similar to Greenstuff (yellow and blue make green!). There’s two inert putties, one wrapped around the other in a tube like a flavored Tootsie Roll. Cut off a bit, knead them together for a minute or two and use it for all kinds of stuff. It’s original use is to seal up holes/cracks in pipes, boat hulls, etc. It works underwater and will glue almost anything to anything.

I’ve found it essential in attaching large and heavy pieces, especially ones that will have a fair amount of stress put on them. An example is the PVC tubing used as the interior skeleton for my Blasta Bommer. In the making of the bommer I’ve used it to attach PVC to Polystyrene to metal. It’s not for delicate operations and should be used for the heavy duty things where you can cover up the ugly putty later.

There is another good use for this putty as it’s very moldable. The curing time is around 15 minutes so you can apply it in bulk and shape it into very complete forms. It’s also sandable and takes paint very well. 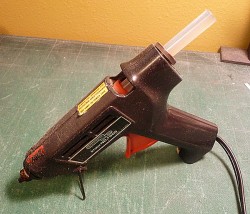 What???? You mean that crafty-crap hot glue gun for gluing sequins on sweatshirts? Yep, I mean exactly that. Hot glue bridges that gap between liquid epoxies and epoxy putty. Again, this is a glue you will want to use in places where you can hide it later. It has a very strong hold, is flexible, and has a short cure time.

I use it for attaching things to pvc when I don’t want the mess of liquid epoxies and it’s very good for terrain. You can get glue guns in a variety of sizes from really tiny (like the size of a Midnight Special) to large, industrial (read: manly!) size that won’t look embarrassing on your hobby bench 🙂