Or Better yet, how did I get here? 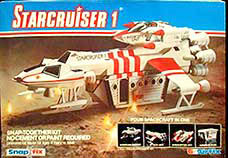 I started my modeling hobby around 1978 when I first saw the US Airfix model called the Starcruiser 1 at Dayton’s while shopping with my mom. I got it for Christmas that year and was so excited I couldn’t hardly wait to put it together. The thrill of building what was on the box was awesome! Although it was a snap-together kit with stickers for graphics, it was really cool in the mind of a 10 year old. I’ve been doing it ever since.

I’ve built hundreds of models in nearly every category: Cars, planes, trains, science fiction, military, diorama, etc. and I have most of the instructions for those kits as a sort of history of what I’ve done and where I’ve been. I won’t reminisce too much about that here. Suffice to say I was good enough to have won a few first and second places in local modeling competitions through the years and even had my local Army recruiters office commission me to build/paint a few of the newest fighting vehicles (M1 Abrams and M2 Bradleys and a few aircraft) for their display cases.

I’ve also always been a gamer. By that I mean the more traditional – more geek if you will – board/tabletop/roll playing gamer.

I started table-top wargaming in 1980 with Avalon Hill’s Midway and the grand-daddy of RPGs, Dungeons & Dragons, in 1981. As with building models, I’ve played many games over the years. As my life changed – job, marriage, mortgage – my hobby time dwindled. Plastic modeling died off almost entirely and my gaming time almost stopped, except for the brief (and expensive) flirt with Magic: The Gathering in the early 90’s.

Both of these hobbies were at a standstill until 1996 when my best friend introduced me to a little (hah!) game called Warhammer 40,000, or WH40K in tighter circles. I immediately liked the game for many reasons. It had a rich, well thought out back story and history, complex strategy and tactics, and awesome modeling potential. This re-energized my interest in both the gaming and modeling hobbies but it would be 5 more years before I picked up a paintbrush.

I decided to devote some personal time to painting these models, not for competition but for myself. My initial goal was to just paint up a couple of models. After test painting my first ork boy I realized this was going to be a much longer process. I eventually settled for building and painting my army over time, whether it took a year, or ten years. Slow And Purposeful as they say. I hadn’t really worked with models this small before and had assumed things from my larger scale modeling days were pretty much the same – and boy, I couldn’t have been more wrong.