by sukigod on August, 24, 2011 in Apocalypse, Blasta Bommer - Comments Off on Cockpit Finished

Cockpit is done for now. 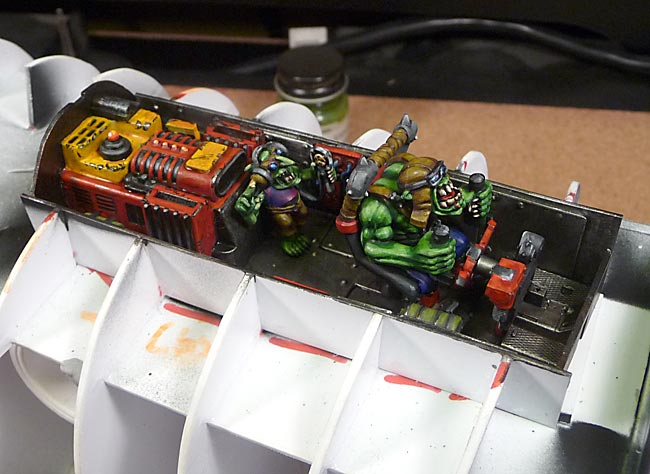 I almost put this aside earlier this week as I ran out of steam. Painting the cockpit made me want to do more painting and not more building. Thankfully for all of you ( 😉 ) I pushed through and started dabbling with the Deff Arsenal. I wasn’t too enthused about this as I had no real idea as to how I was going to get everything to fit, at least everything I had pulled out of my bitz that I thought should have gone into it.

I was glueing the weapons together and randomly placing guns and rockets, trying to get a feel for what should go where and what it should look liek in general when I placed the battlewagon upgrade kill kannon on the the upper nose. It really gave the feel of an eye so I played around with various tubes and realised the kannons looked too big (gasp?!) and somewhat out of place. They were really big but tended to look like two big kannons instead many barrels of smaller calibre guns slapped together. Then it struck me…

“Scratch build yourself some silly, mulit-barreled, water cooled looking machine guns with various ginourmous barrel diameters? While you’re at it, do two – one for either side! Yeah!”

So I’ve decided to scratchbuild a set of guns that look like oversized big shootas with cylinder ammo feeds with smaller, similar big shootas attached to the sides. I think this will give the deff arsenal a better “more dakka” look rather than the “more blasta” look the kill kannons would have given it. This also frees the kannons to be used on something else – something ground based. This doesn’t mean it’ll be the only gun, I’ll still be loading more weapons around the missile bays as well.

So now I’m off to the research phase on what this should look like. I’ll try to draw up some plans before going straight to the knife and p’card.