by sukigod on March, 17, 2011 in Apocalypse, Blasta Bommer - Comments Off on Making Orky Jet Engines

Spent 2 hours last night making the primary engine intakes. Fiddly work but it’ s got to be done! Here’s how I did it.

There’s a couple of different ways to do turbine blades. Some of them include math and geometry. Mine include neither! I completely guessed (as any good mek does) on the number of blades and how to make them even. I choose 12 fan blades.

I started by cutting out 5 similar sized disks. Two for behind the fan blades to glue to and three for cutting the fan blades from. I didn’t do any magic measuring of fancy stuff to come up with cutting 8 pie shapes from each. I just wanted to make sure they overlapped a bit and I figured if I squished four more slices into a circle originally dissected by 8, there should be some overlap. If you understood that well enough, here’s your degree! 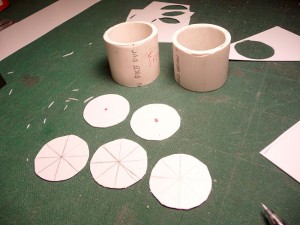 I cut the three disks into pie shapes and then cut the tips of each off. Things get really tight at the center of the turbine if you don’t do this. Trying to stack 12 layers of plastic in the middle of the circle will only cause problems so away they go. We’ll be covering this part with bullety shaped part anyway.

I made a time-wasting mistake with my first turbine blade by laying the first blade down, the the next – and on and on – until I reached the first one and tried to slide the last blade under the first one. Didn’t work. It was nearly impossible to align the blades evenly this way and the glue had a tendency to set more than I would have liked by the time I got all the way around, causing sticky problems. Then i hit on this idea… 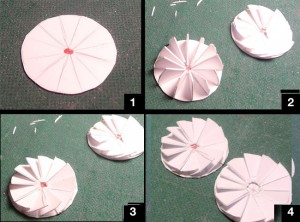 1. Draw out the radians so I know where to line up the fan blades.
2. Glue all the fan blades in place with them all standing up. This was much quicker as I didn’t need to worry about jostling the other blades and it was easier to see the markings. (the original wreck of a turbine is upper right)
3. I used the back end of my exacto knife to push the blades down on one another a little at a time. Since the glue was still soft-ish, but still sticky enough to keep t from sliding, the fans kinda hinged down against each other. This kept the blades in place and they automatically went down to the farthest angle possible n their own without any measuring.
4. Leaving me with this. These are both, finished turbines. Not perfect (I’ve seen much better) but will work for me. 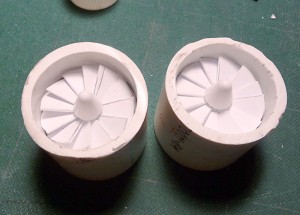 Here’s the turbines now glued in place. I just hotglued them in place, they didn’t need anything more complicated. I’ll be making a rounded edge using putty just like pox did in his build. No need to remake the wheel. Depending on how well this masks the gap between the fan blades and the housing wall, I might try to find a gubbin that will ring the housing to cover it a little – we’ll see what the bitz box has.