My tripod came in yesterday and got the chance to get it ready late last night. Here now, in excruciating. boring detail, is how I modified the tripod for my bommer.

Here’s the original tripod, maybe $20 tops online (Amazon.com I think). It’s rated to hold up to 2 pounds but after getting it in the mail and wrenching around with it for a bit I think that is determined by the swiveling head and not the actual tripod support legs themselves.

The stand itself is pretty sturdy. When I was finished I “stress” tested the hold by putting the plane as it is so far on it for normal use, then stacked my two skullhammers on top (as best I could) with different weight distributions and not only did the connection hold fine, the balance stayed pretty stable as well. I’m not worried about this thing falling over one bit. 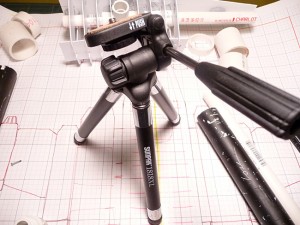 I disassembled the multi-axis head down to it’s component parts. I wanted to see if I could keep the swiveling aspect of the pan head since this will give me more placement options on the table with the skinny legs, then simply turn the plane in the direction I need. The part I’m most interested in is the center pivot/swivel joint. I need this (the black part) to fit inside the threaded pvc connector. 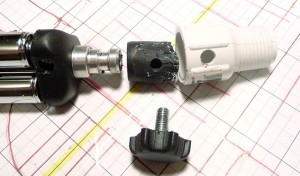 I applied a pit of plumbers putty inside the pvc connector and made sure I spread a thin coating around the inside barrel portion of the connector, then shoved the pan head part into it, centered it on the lock screw hole and added some more putty around the bottom for good measure. After curing I put the whole thing together for testing. 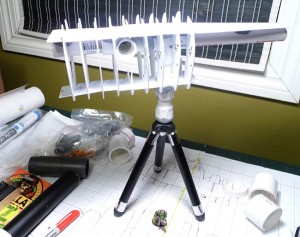 As I mentioned earlier, My biggest concern was “is this gonna hold? Did I cheap out too much and not get a sturdy enough tripod?” My fears were quickly put to rest. Because I changed the way the tripod connection system worked, the listed weight limit for the pod was pretty much nullified. I put some pretty good pressure on that thing, to point where I was going to break something, and it held just fine.

Here’s scale shot of the finished support system with a little Barry boy for fun. 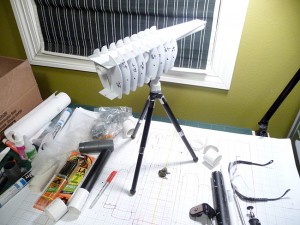 I’ve started cutting parts for the main engines (as seen in the last pic) and will be starting work on them today. I might switch to the nose for some variety – besides, I’m excited to see all the weapons I can cram into the Deff Arsenal!