by sukigod on August, 30, 2010 in Apocalypse, Waaagh! - Comments Off on Small Ork Apocalypse Army

Quick shot of the 5K I’m bringing to the Apoc battle this weekend. 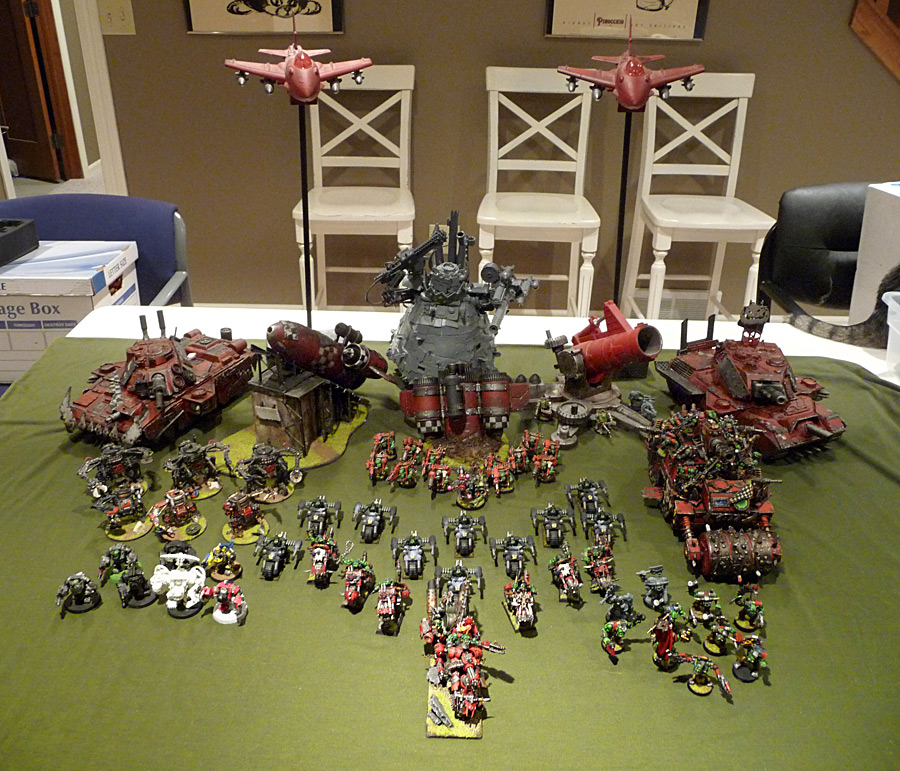 Astute orks might notice two skullhammers when my recent list only calls for one. I couldn’t help posting this with both since they were both painted. So technically, this would be 5.4K not 5K even. I’ll only be using one this weekend.

by sukigod on August, 08, 2010 in Apocalypse, Skullhammer Tank - Comments Off on Skullhamma primed

Primed and some Barry shots, – nobs and a battlewagon. 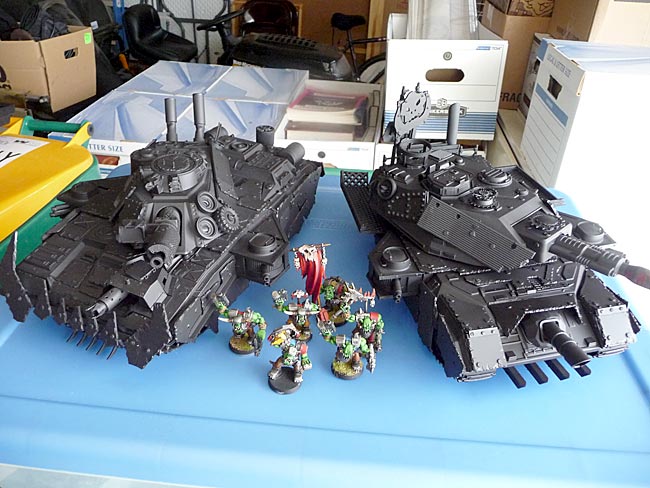 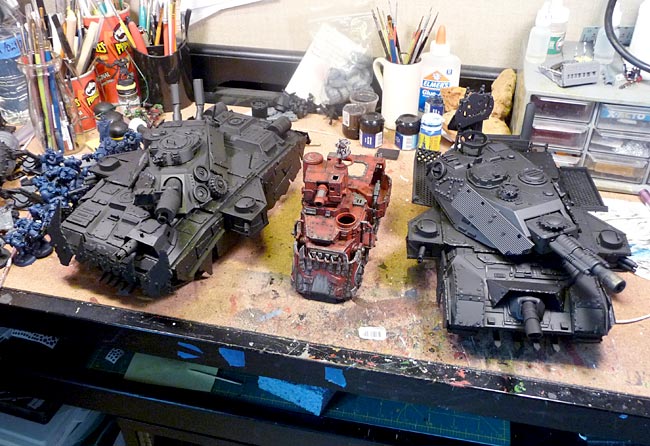 by sukigod on August, 08, 2010 in Apocalypse, Skullhammer Tank - Comments Off on Painting the Skullhamma Battle Fortress

Masked off and ready to go to the garage for airbrushing. 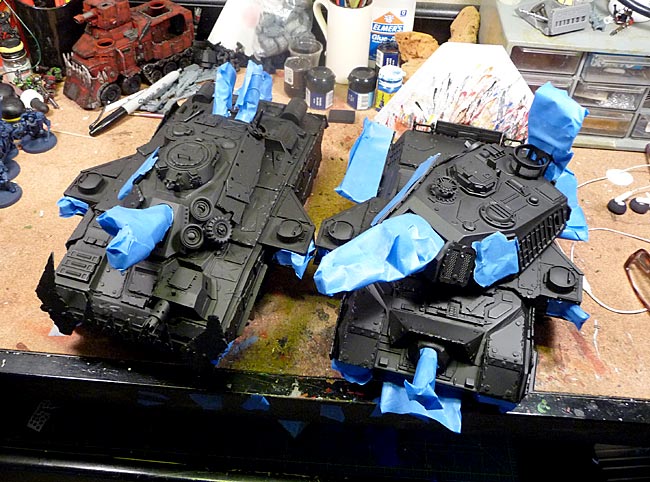 Skullhammas taped off for airbrushing 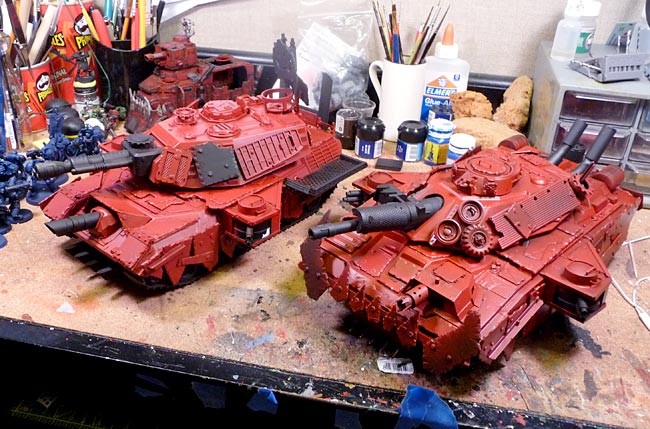 They’re really bright at this point so they’ll look a little cartoony – this is even more pronounced in the photos than in real life. Next will be the metals and details, then a couple of overall washes and then paint chipping and done.

Gotta figure out which ones I’ll be doing after that. Matching Pulsa Rokkits? A kustom battlefortress? Maybe the pair of flakka dakka wagons? All before Oct.!

by sukigod on August, 05, 2010 in Apocalypse, Skullhammer Tank - Comments Off on First Skullhamma Complete

OK. Finished with the first skullhamma, the other should be finished tomorrow with the hope of priming tomorrow night.

Photos, that’s about it. I’ve greyscaled it because the color version is even harder to tell what’s what. 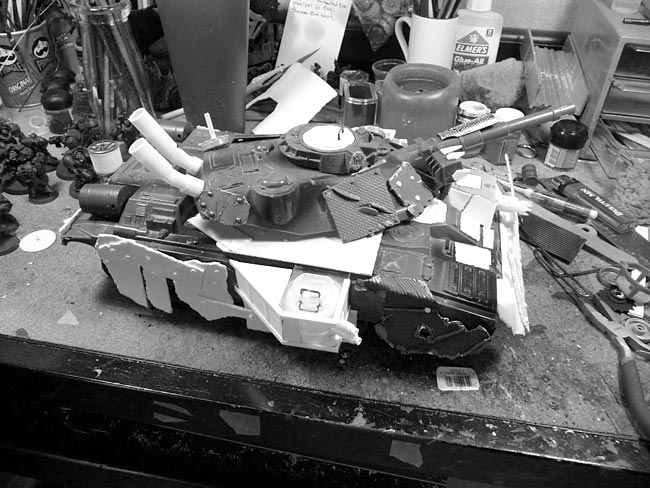 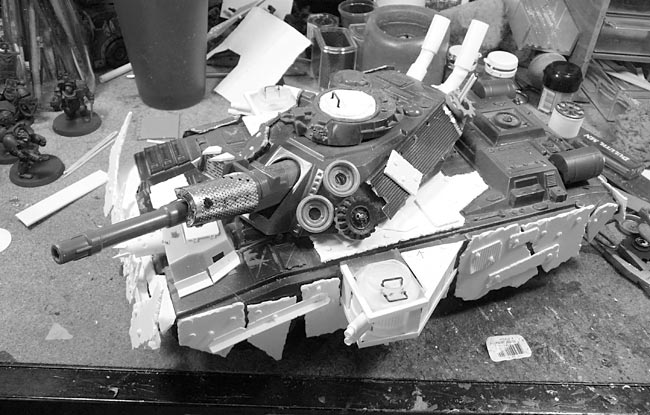 Nothing too detailed or “soopa doopa orky”, just looted and plated enough to tell it’s not an imperial machine anymore.
Primed. 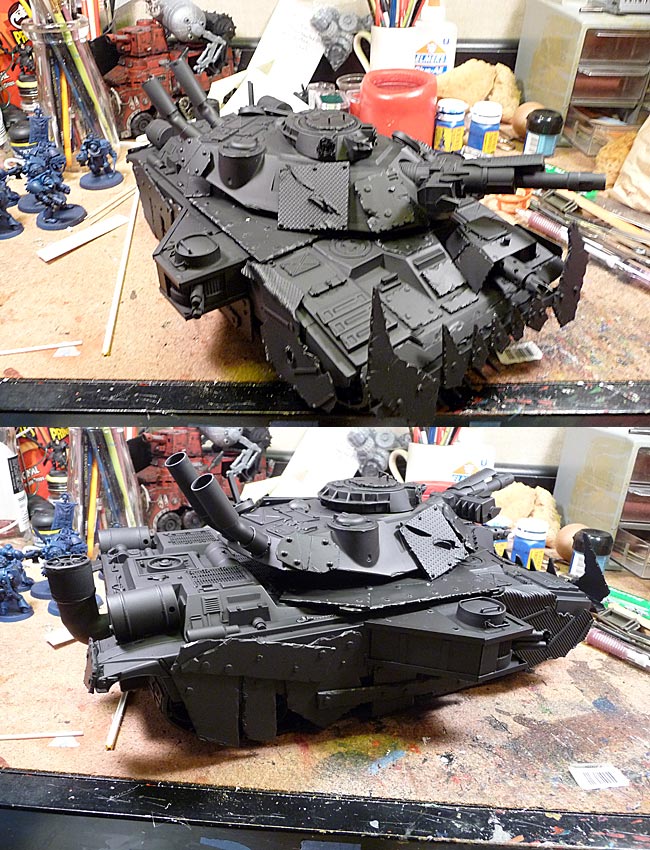 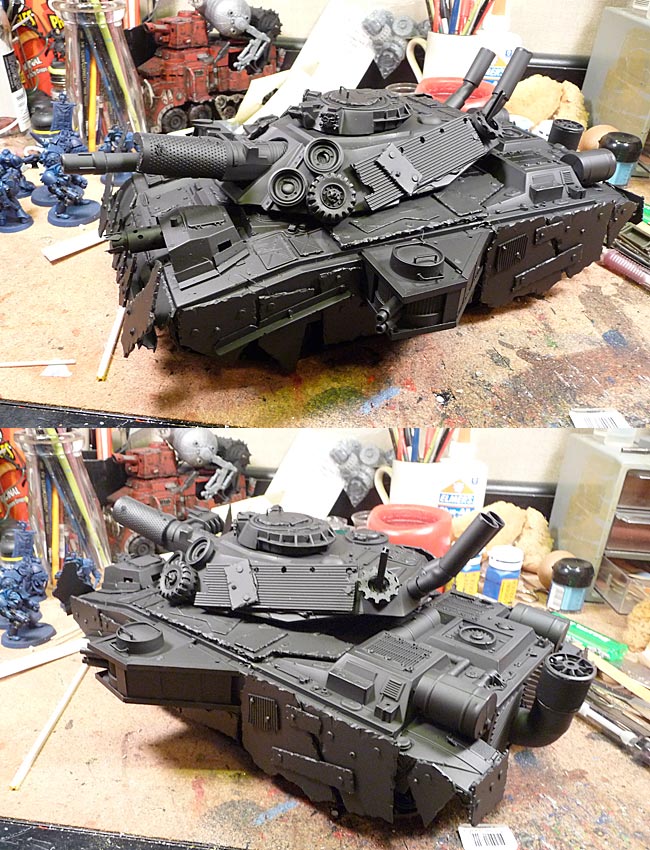 And both on the workbench. Started the armor plating on the second. 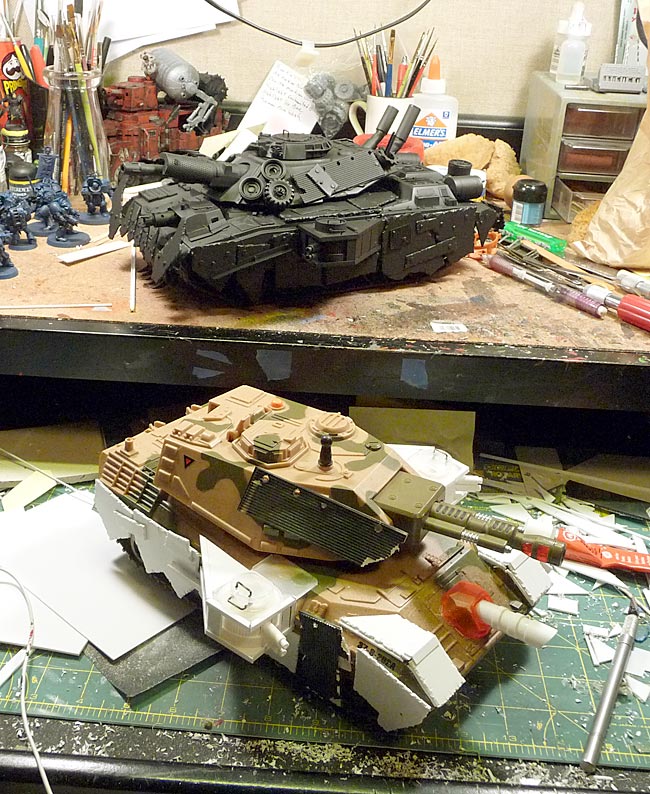 by sukigod on July, 18, 2010 in Apocalypse, Skullhammer Tank - Comments Off on Kannons Komplete

OK, forced once a week update here. Got the base kannons done so all the armaments are finished. I know they look all slapped on but I’ll be “blending” them into the body better in the scrapping/junking phase, which is next. 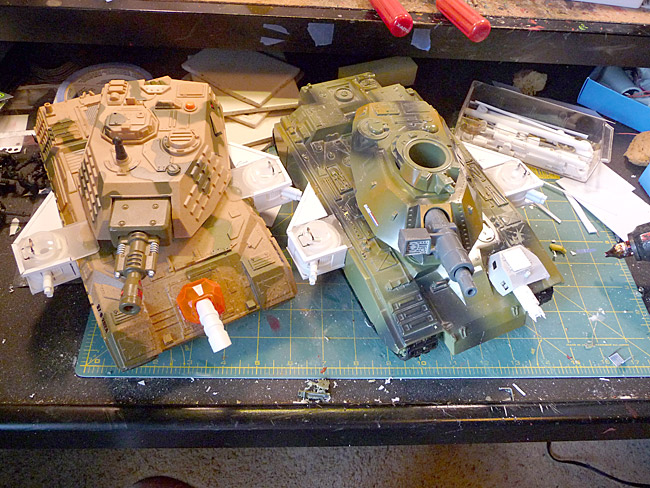 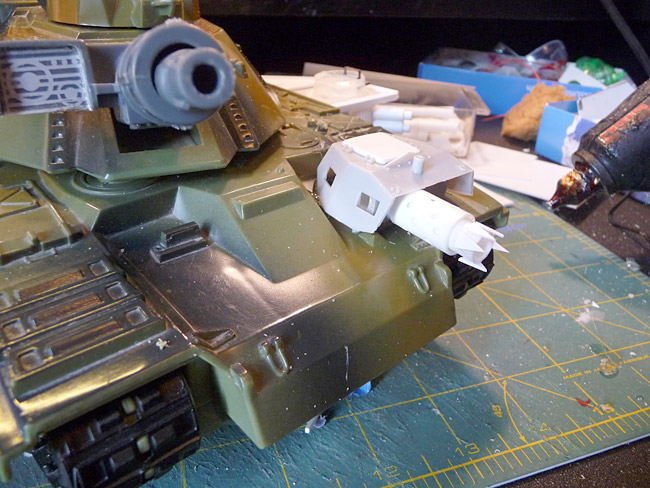 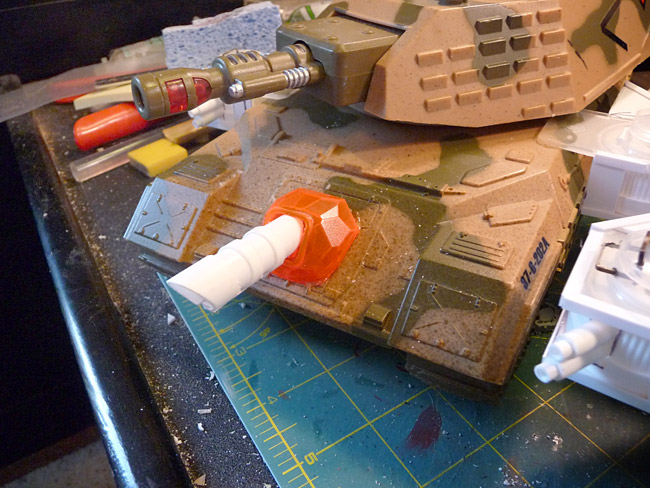 by sukigod on July, 18, 2010 in Apocalypse, Skullhammer Tank - Comments Off on Scrapification

Started the armoring and scrapification of the first tank… 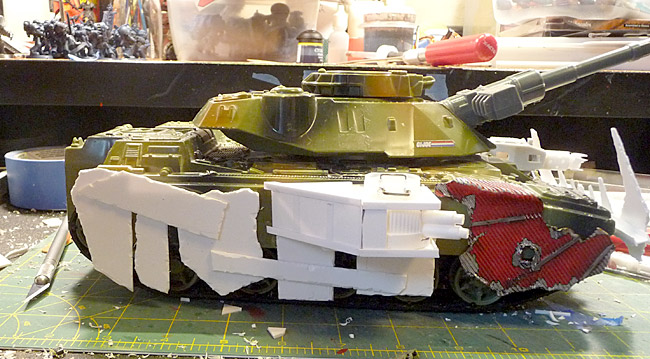 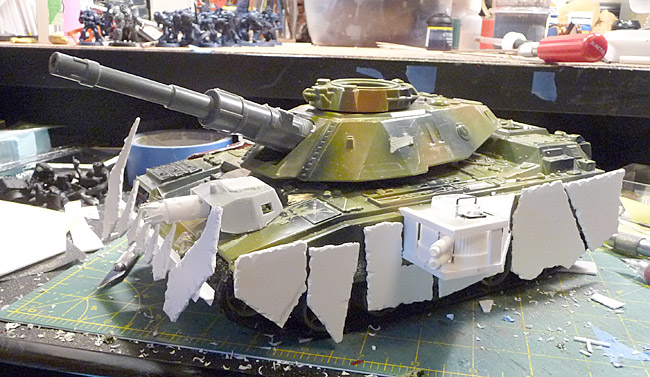 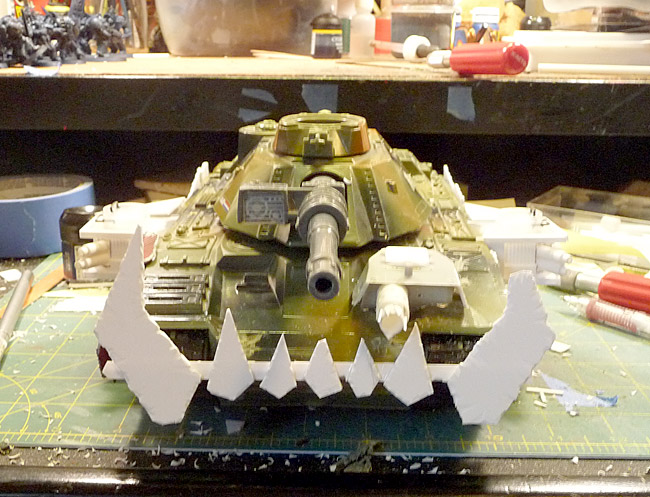 Yes, a bit sloppy, but that’s what I’m going for. No one will mistake this for any other kind of unit on the table. Depending on schedule I’m hoping to be painting these things by next weekend. We’ll see.

Finished the skullhammas sponsons tonight. I still have the rivets to do but I’ll do them all at the end. Here ya go! 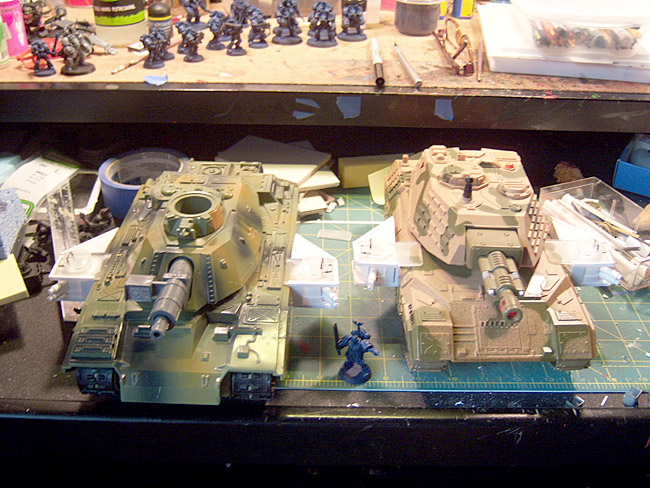 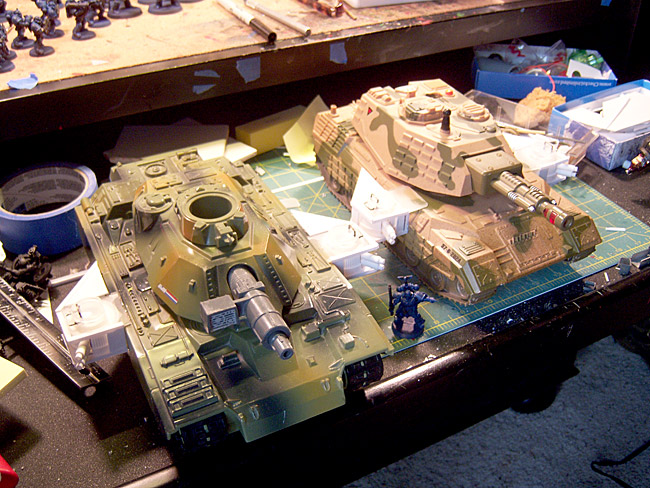 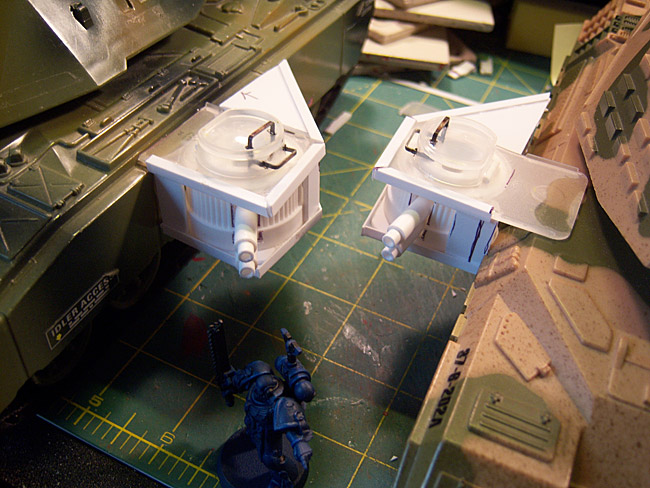 Next are the kannons.

A Pair of Skullhamma Battle Fortresses

by sukigod on July, 08, 2010 in Apocalypse, Skullhammer Tank - Comments Off on A Pair of Skullhamma Battle Fortresses

Started the work on the pair of Skullhammas tonight. Figured I’d get the armaments done first, then I can just slap plates and rivets and call it good. I spent about 20 minutes sifting through 4 big buckets of parts and came across these parts. 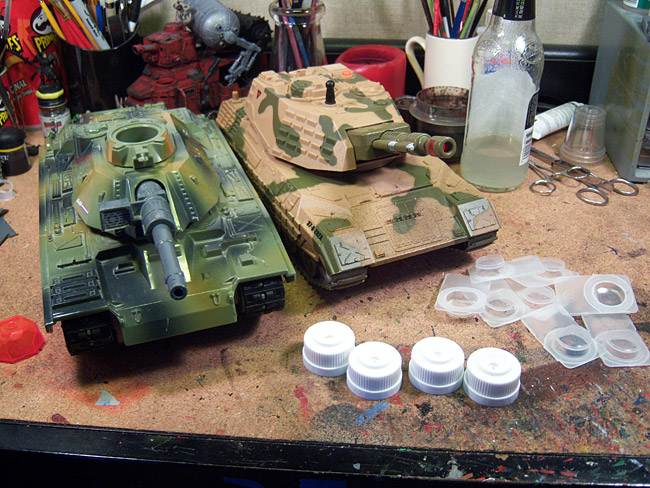 I just new I’d have a use for these some day.The square bits are the packs some brands of disposable contact lenses come in – yes I kept a lot of the foil seals from them too. They will make great realistic metal plates and thin bent metals! The caps are from the automated shower cleaner bottles. Yep,  I scavenged those too. It’s easy to collect these kinds of things and just throw them into a box and leave’em til ya need’em. The repetition in these kinds of things is what lends an air or function to using them in scratchbuild/kitbashes. Industrial Light and Magic uses the same techniques when making thier models for movies.

I decided to knock out the twin linked big shootas on sponsons as they contain the most fiddly bits. 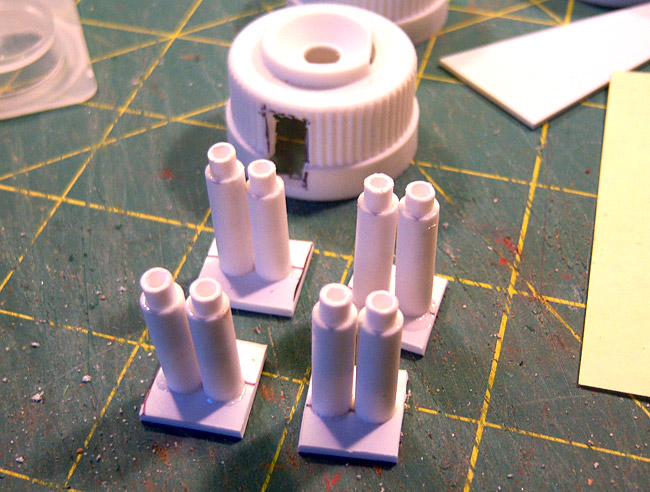 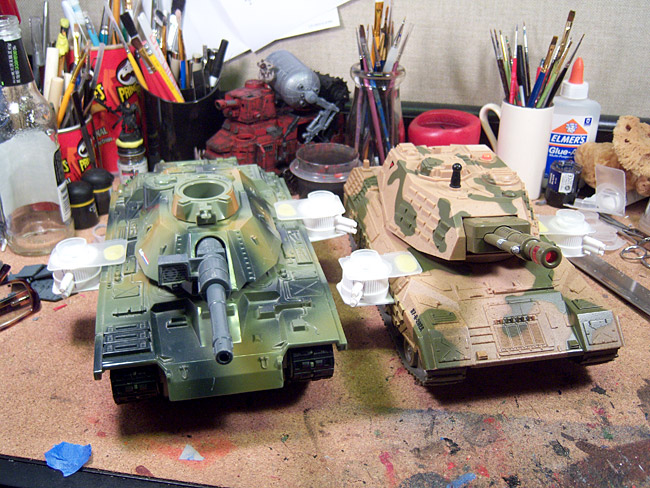 Last picture shows the half finished sponsons poster tacked to the tanks. All I need to do to finish them up is some plates ib the back and side and some angle iron over the edges with rivets and I’ll call-em done. Oh yeah, a little hatch for the top of each! The little well where the contact rested make perfect hatch circles – neat!

btw – don’t expect these to be super detailed like the other work I produce, I’m purposely moving fast on these as I won’t have time otherwise to finish all of the models I need to by the beginning of October and I’ll probably only use them once or twice a year.