by sukigod on November, 26, 2012 in Apocalypse, Blasta Bommer, Imperial, Imperial Guard - Comments Off on Ork Superheavy Blasta Bomma Brought Out of Mothballs!

So I sliced my finger good (or bad, depending on how you look at it) the other day. It’s still thumping sore but works gotta go on, right? Here’s the cut… 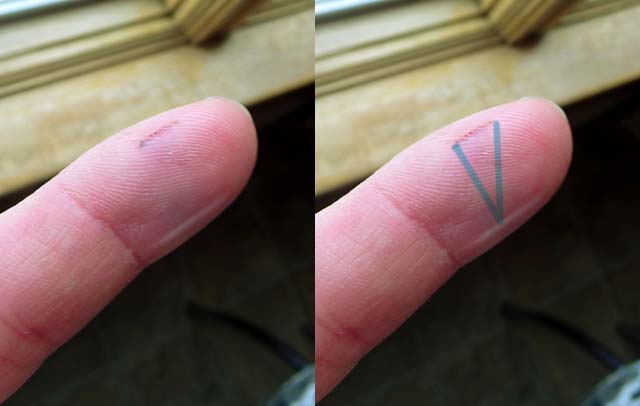 Doesn’t look like much in the photo at left, a small cut. What you can’t see very well in the photo is the deep slice and blood bruising in the perfect shape of a #11 Exacto blade, outlined in light blue. Going to be interesting to see how long this takes to come all the way to the surface.

In other news, I purchased a new tool. A 1 ton aircraft steel punch! I got this for making rivets since my old punch all of a sudden went bendy-wendy on me, not sure why/how. This has various plug/punch dies that fit into it so I can make a few different sizes I’ll be using this soon on the bomma and I’ll let you know how it works. 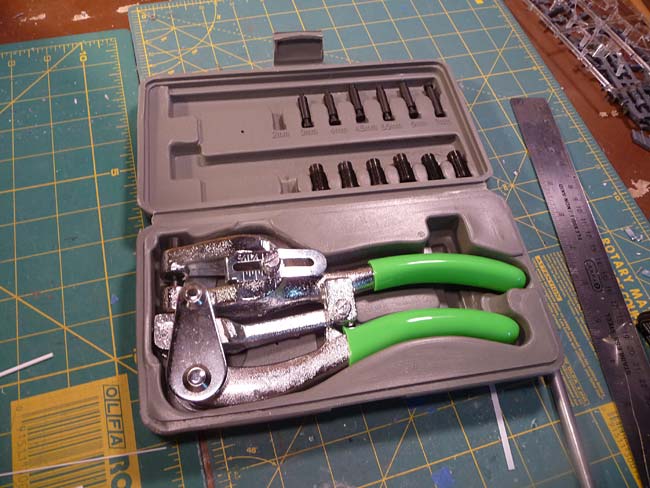 On the modeling front I did get some of that worked on today. First up, my test scheme for the new ‘umie force I’m starting as an alliance. I like how he turned out except the green uniform is a little light in my opinion, I want something a little more towards an olive drab green. I know how to fix that, just didn’t go back to change this whole thing. I also tried the decals from the box and was sorely disappointed. I think I’ll just go with some freehand of some sort. I might also play with the gun color, changing it to black as I think there might be a bit too much green going on and a little more black should balance that out. 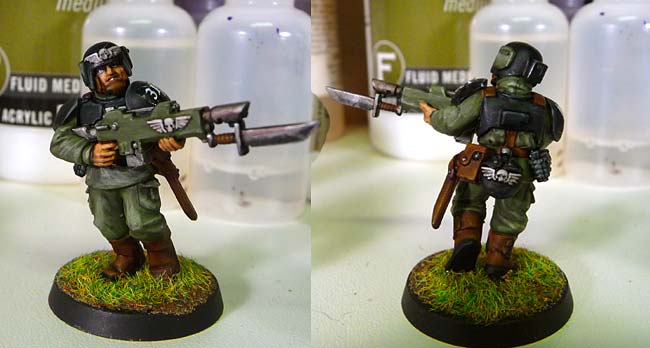 I also dragged the blasta bomma out of mothballs finally and started work on that. After putting the dakkajet together I figured out how I was going to do the turret gunners on top – grot gunners from the burna bomma parts! I just need another dakkajet and I’m good to go there. I started by wrapping up the detailing on the nose/deff arsenal section. Added the banding to “strengthen” the look and bolts/rivets to the bridge of the nose and new banding. 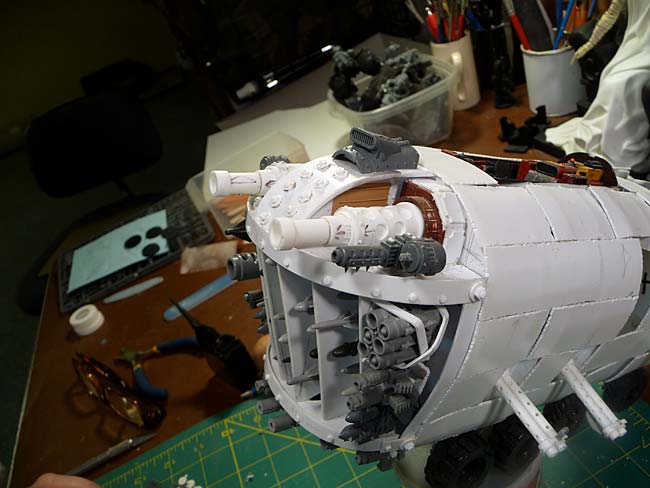 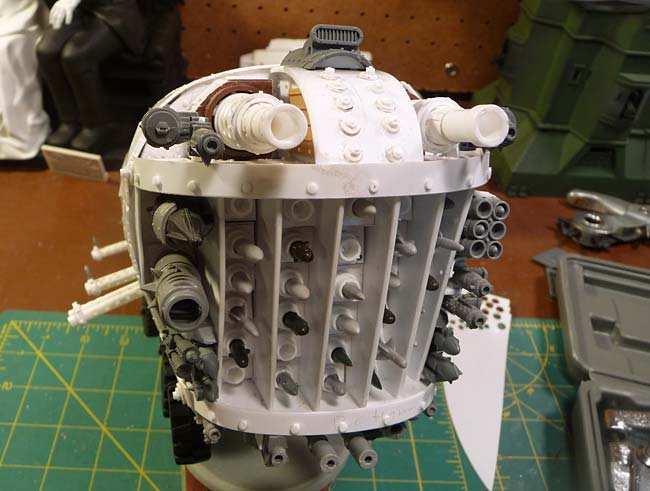 Felt good to start cutting and gluing again. I’m hoping to keep working at a steady pace and completing this by the end of next summer. We’ll see!

Did some work on the Bride and IG trooper tonight. You can’t see it from the photo but I airbrushed a coating of Bleached Bone over the entire gown, then do a white zenithal highlight from the top to let the Bleached Bone be my shadowing. It’s very subtle so nearly impossible to see in the pic. I’ve also done the bandaged arms. 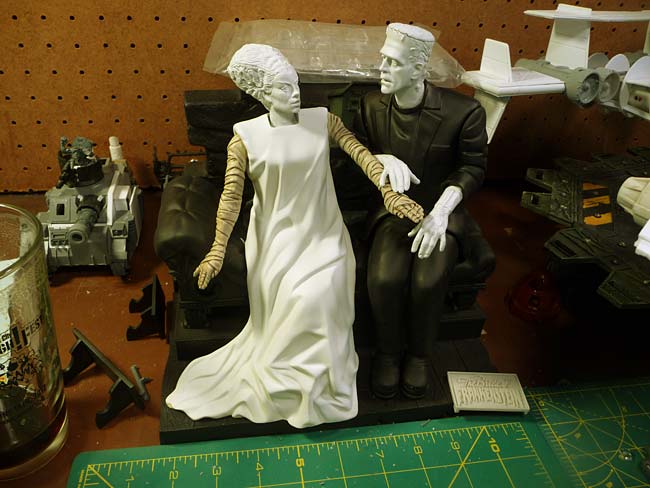 I’m looking for a color scheme for my new guard army too so trying something on a trooper. The idea is a medium green cloth with black carapace armor and brown boots. Nothing too fancy, they’re army, errr, guard! I think I’ve got too much highlight area as the medium green is disappearing. This is also the first time I’ve every done human faces so it’s gonna take a little time to master that. 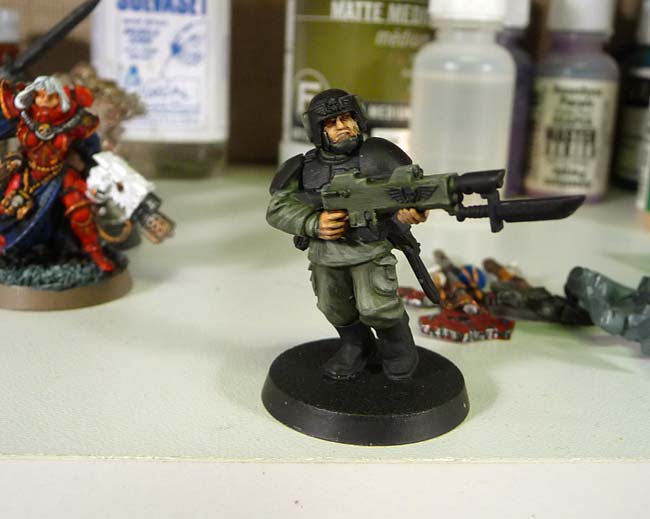 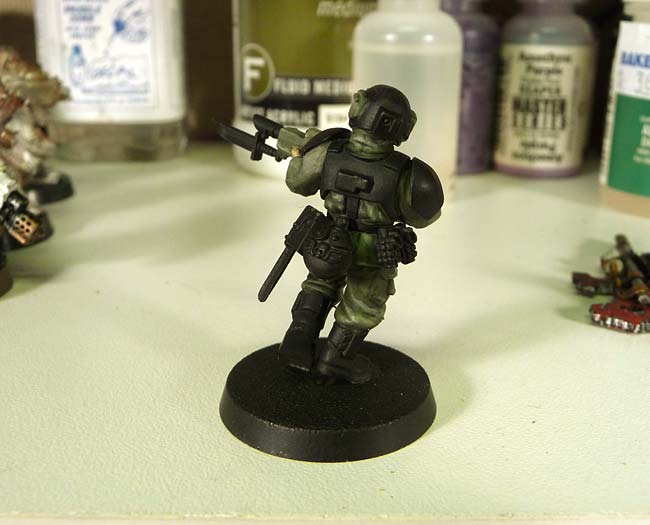 Now I’m off to research painting these guys eyes, they’re even smaller than orks!