by sukigod on June, 16, 2008 in Heavy Support, Scratchbuilt Battlewagon - Comments Off on Painting and Deff Rolla Fix

I know this isn’t what you guys would want to see in an update but it’s where I’m at. Things are slow going since it’s summer (finally) here in the northern US, although I did get a chance to sit down and start slapping some more paint down.

I’ve gotten a majority of the red areas blocked out and done. Blocked in white where I’ll be doing checkers with a micropen. Started base painting the metallic areas with black/bolt gun mix going up through bolt gun. The reds are the standard GW progression, the scab red applied with a brush (over the Mecharite Foundation) and put the rest on with a sponge technique as to enhance dirty/worn out effect, but I didn’t go all the way through the blood red as I’ll save that for the highlighting after weathering.

This is my thought process for painting this beast. I’ll paint it in somewhat “new” condition and not worry so much about painting in all the dirty and grime early. The paint job will be “fresh” and then I’ll grease/grime/rust it up so all the underlying paint is actually under the crud. When that’s all said and done I’ll go back and do any highlighting and bringing the colors up to where I need them before sealing it.

The deff roller is in sad shape as you can see below. The glue I used didn’t quite take enough so the plates are falling off. I’ll most likely remove them all, scratch the pvc pipe up real good, maybe even drill small holes for the epoxy (which is what I’ll use next time to hold onto. Lessen learned. Regular model glue doesn’t hold to pvc. 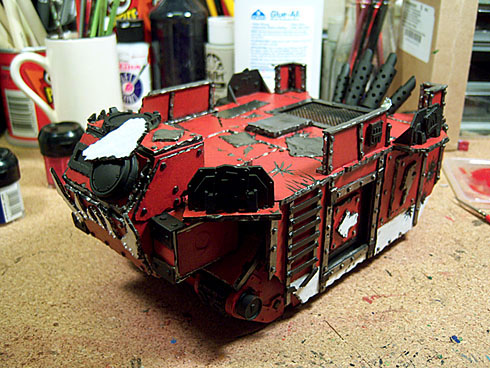 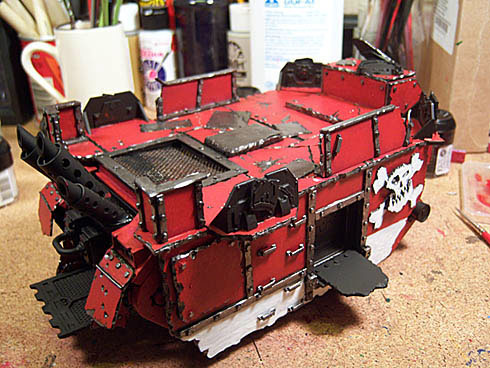 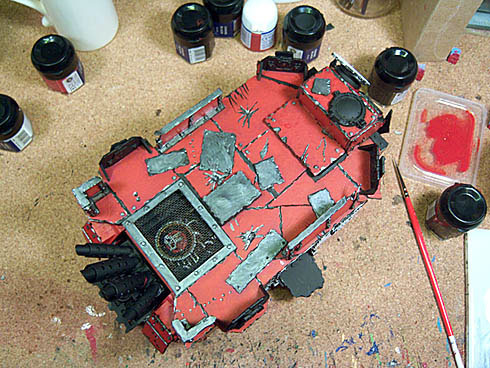 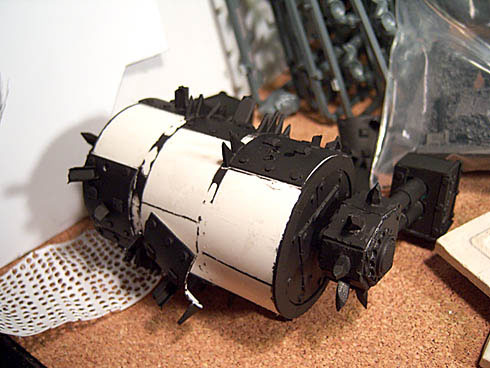